“Give me your tired, your poor,
Your huddled masses yearning to breathe free,
The wretched refuse of your teeming shore.
Send these, the homeless, tempest-tost to me,
I lift my lamp beside the golden door!”

This line from a poem by Emma Lazarus is famously etched on the Statue of Liberty and has become part of American folklore. But for some, it has become a rallying cry against President Trump’s immigration policies and taken on new meaning. It made headlines recently after acting U.S. Citizenship and Immigration Services Director Ken Cuccinelli made controversial comments to NPR suggesting that the words “…who can stand on their own two feet and who will not become a public charge,” should be added to the poem.

Since its beginning, the United States has been infused with the energy of new immigrants, yet their assimilation has seldom been smooth. Today, immigration has become a sharply divisive issue. New arrivals in the U.S. have always experienced waves of hostility, as some view immigrants as a threat to the integrity of the nation’s culture, but in 2016 the notion that foreigners somehow make America less American ratcheted up a few notches. In many ways, we are a stronger and more dynamic country because of the influx of immigrants into society. One does not have to look far to find success stories. Consider the coveted Nobel Peace Prize, for example, of the 122 Americans awarded the honor over the last 20 years, 34 were immigrants.

Many high-profile immigrants recently elected to public office are playing a key role in breaking down stereotypes. There are seven Arab Americans in the House of Representatives, four Republicans and three Democrats, as of 2019.

Currently, there are at least three mayors in New Jersey who have Syrian or Lebanese heritage. Mohamed T. Khairullah was recently elected to his fourth term as mayor of Prospect Park, a small borough in Passaic County. Khairullah, a Syrian-American who came to the U.S. in 1991 as a teenager, became a U.S. citizen in 2000. First, he was elected to the Borough Council, then to the top office in 2006. This past January he was sworn into another four-year term.

See photos of Mayor Khairullah sworn-in to his fourth term in TapInto by Thomas E. Franklin

Khairullah has been an outspoken leader in the Syrian-American community and around the country. He is highly critical of the current Syrian regime. He has made several secret trips inside Syria to deliver supplies to schools and hospitals. He has seen the damage and casualties of the war firsthand. He has called for the ouster of Syrian President Bashar Assad, and for an end to the bloody civil war.

When Intashan Chowdhury was sworn in as the new Borough Administrator in Prospect Park, he made history. Chowdhury, 22, is believed to be one of the youngest town managers in N.J. history, if not the entire country, and he is the first of Bengali descent. Mayor Khairullah was Chowdhury’s teacher in high school, and since then he has become his dutiful protégé. With his family surrounding him, Chowdhury was sworn in by his longtime mentor, as N.J. Governor Phil Murphy and other elected offices looked on. Chowdhury, a first-gen immigrant, beamed with pride.

Andre Sayegh was elected mayor of Paterson, the third-largest city in the state. Sayegh was born to a Syrian mother and a Lebanese father and is Christian. He is the first Arab-American to lead the city, which has had a thriving Middle Eastern immigrant community for over a hundred years. He was the longtime city councilman in that district before he became mayor in 2018.

The gregarious Sayegh exudes pride in his city, which is home to a wide range of ethnic groups. Paterson, which is often credited as the birthplace of the Industrial Revolution, is currently undergoing a mini-Renaissance. The bustling South Paterson neighborhood teems with Arab and Turkish eateries and shops, drawing visitors near and far. Many believe Sayegh’s election victory underscored the importance of the Arab-American community’s contributions in the political arena, as well as economic and cultural life in N.J. 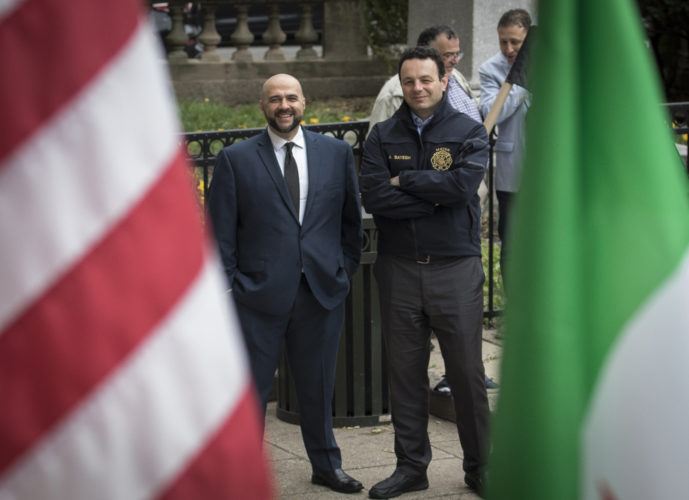 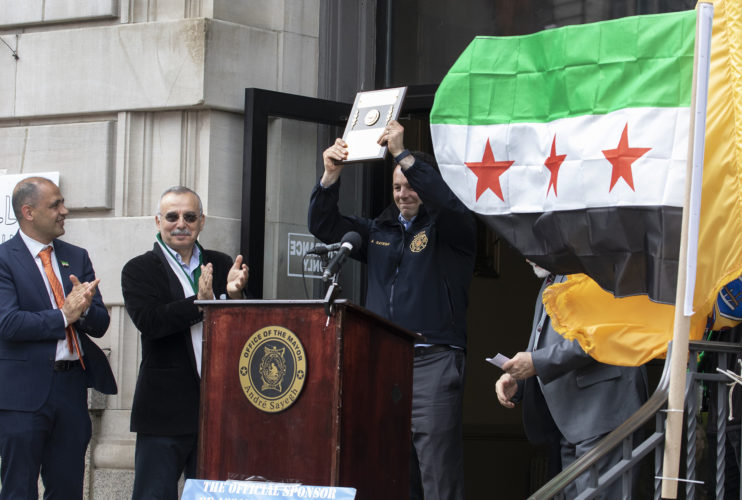 South Paterson is among a handful of Middle Eastern enclaves in the U.S. with a distinctly Middle Eastern vibe, among them Dearborn, Michigan; Little Arabia in Anaheim, and in parts of Brooklyn.

A mile of Main Street here in the southern district of New Jersey’s third-largest city is reminiscent of the Middle East — the language spoken, store signs, and the restaurants, that some refer to it as Little Ramallah, or Little Istanbul. Within a stretch of 10 blocks, there’s an array of Arab and Turkish stores and shops.

Census results do not reveal how many people of Middle Eastern or North African descent live in the area, but the Palestinian American Community Center in Clifton estimates there are roughly 15,000 Arabs in Paterson, a city of more than 145,000. Arabs, and in particular Syrians, have a long history in the city.

While immigrants have come under scrutiny during the Trump Presidency, here, they’ve created a sense of optimism, helping renew a city beleaguered by crime and corruption, and long in decline. Here, Main Street is thriving, and many of its buildings are new and upscale. As more immigrants trickle in, family businesses are leading a mini-boom.

Fattal and Noury, entrepreneurial families from Syria, are household names. Over the decades, they have been joined by dozens of others, where you can find 24-carat gold jewelry imported from the Middle East, and exotic Arab food products hard to find elsewhere in the region.

Sayegh, who was raised in this enclave and whose parents immigrated from Lebanon and Syria, sees a future for South Paterson as a national culinary destination. He refers to south Paterson as the “halal meat-packing district” and fashions himself as the Anthony Bourdain of Paterson.

Sayegh has an occasional food blog that offers “highly recommended restaurant items of the week” in video snippets filmed by his wife. He’s helped organize a food truck festival and regularly posts about new eateries on his Instagram account.

“I’m trying to create a city of gastronomy,” says Sayegh. “We want to leverage the culinary culture that exists here and become even more of a destination for foodies.”

In Paterson, a ceremony is held each year at the city’s Great Falls National Park, an idyllic setting for such a momentous occasion. The park hosted the naturalization ceremony in its new amphitheater, in partnership with the U.S. Citizenship and Immigration Services, where 38 people from 16 countries became new citizens in the ceremony.

Darren Boch, park superintendent, said, “It’s fitting to become a new citizen here, as this was the site of the nation’s first planned industrial city, a city built by immigrants and founded by Alexander Hamilton, himself a great immigrant success story.” 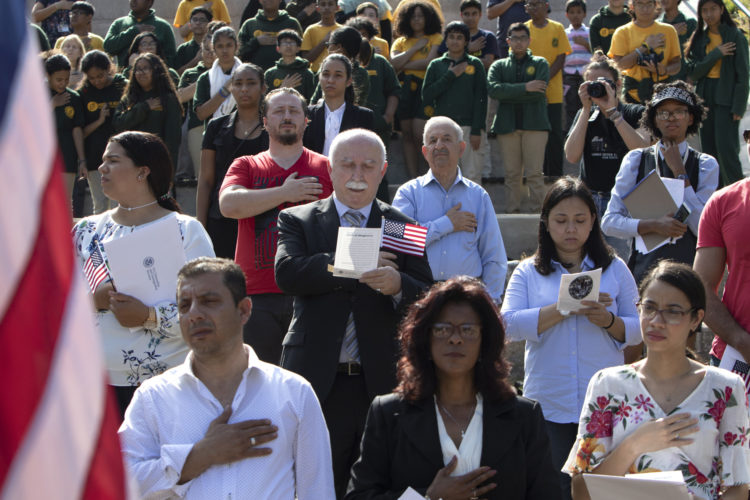 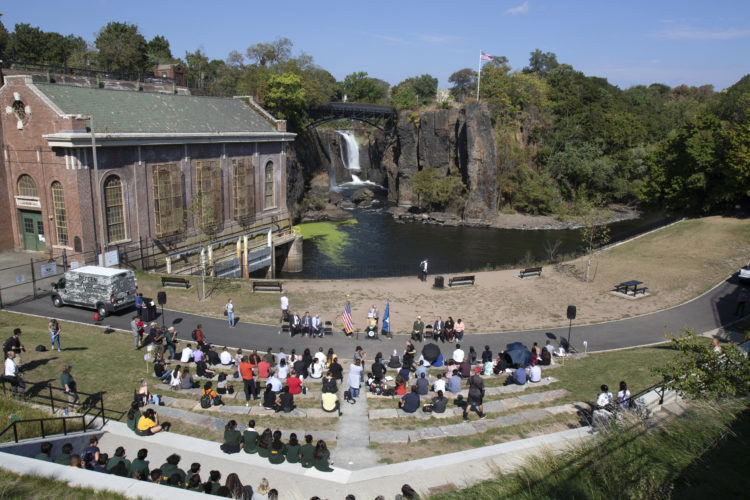 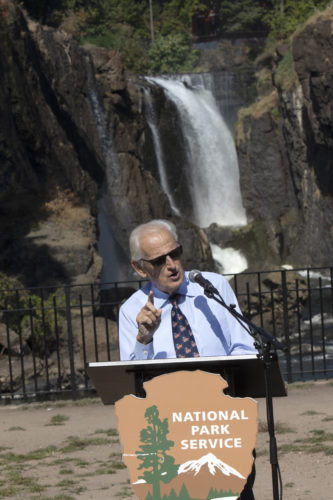 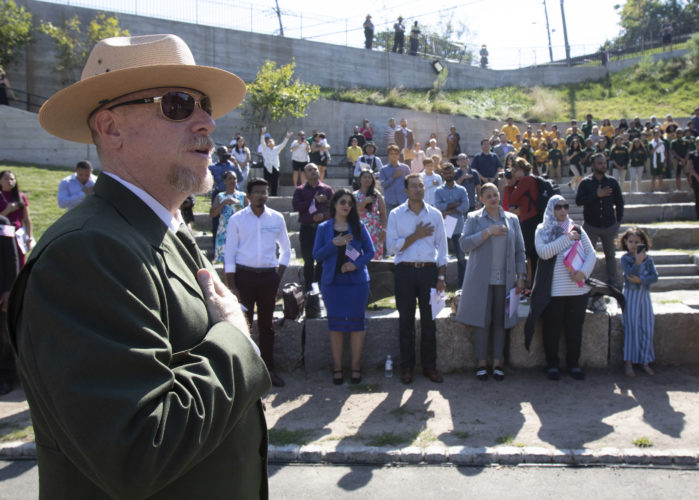 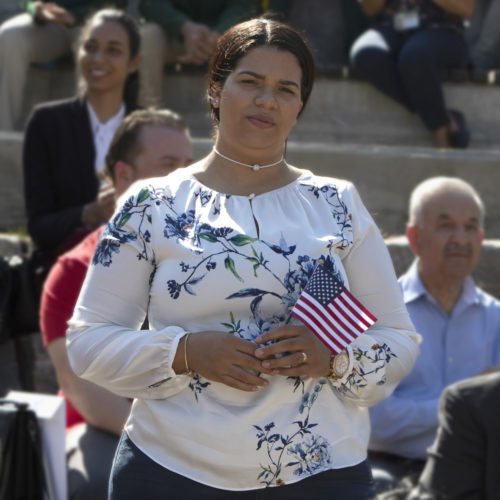 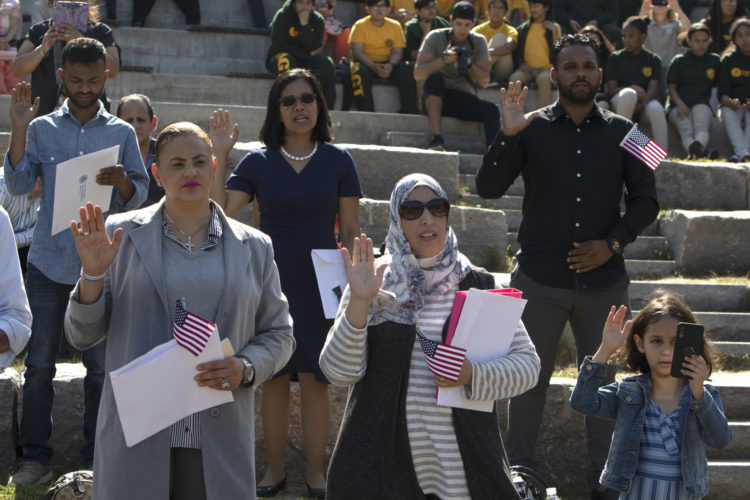 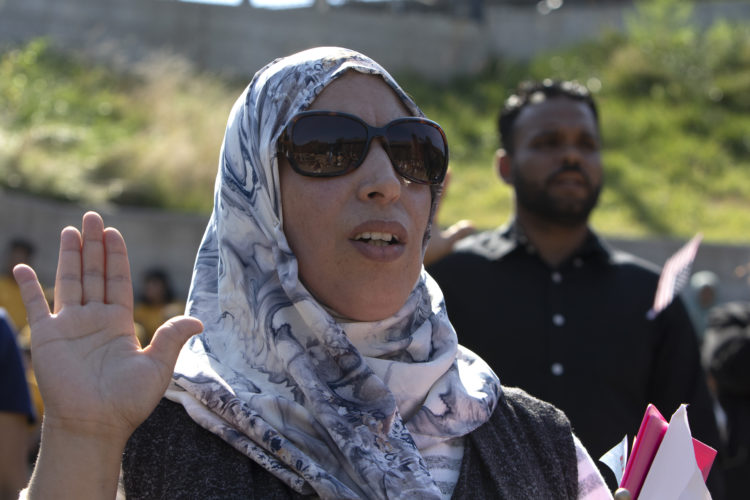 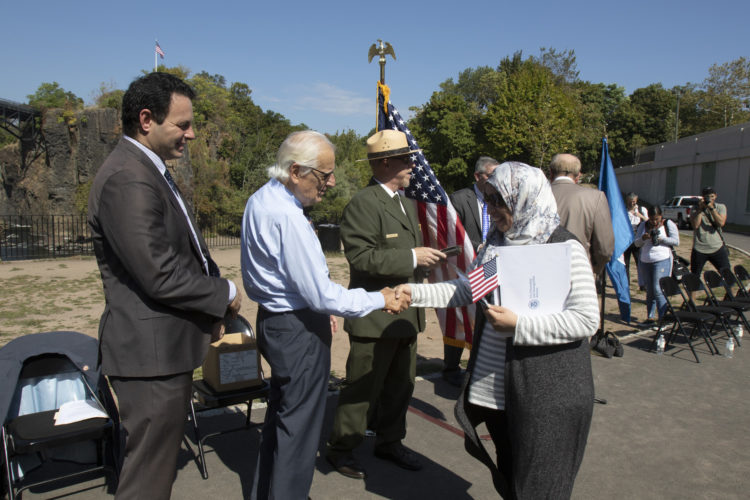 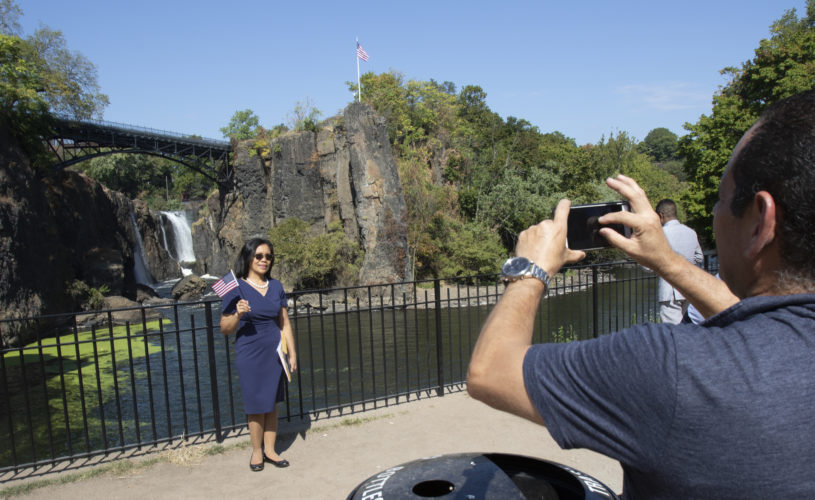 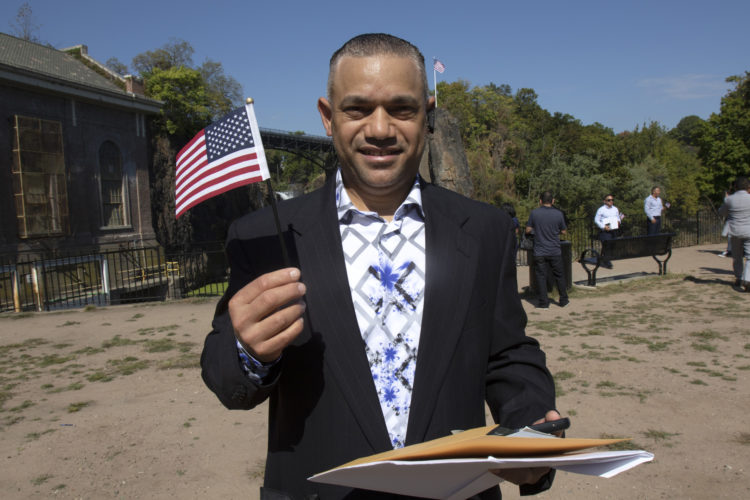 dashboard Return to Table of Contents